Thailand’s yearly Vegetarian Festival has its roots in a nine day Taoist celebration called the Nine Emperor Gods Festival and is now incorporated into Thai Buddhist practices. It starts on the eve of the 9th lunar month in the Chinese calendar and this year begins on Friday 20th October 2017 continuing through to Saturday 28th October.

The vegetarian festival is very popular throughout Thailand even more so in areas with large populations of Chinese immigrants such as the island of Phuket, Bangkok or Chiang Mai. The yearly Phuket Vegetarian Festival is the most vibrant and extreme celebration of the festival, with some pretty crazy body mutilations during city parades. 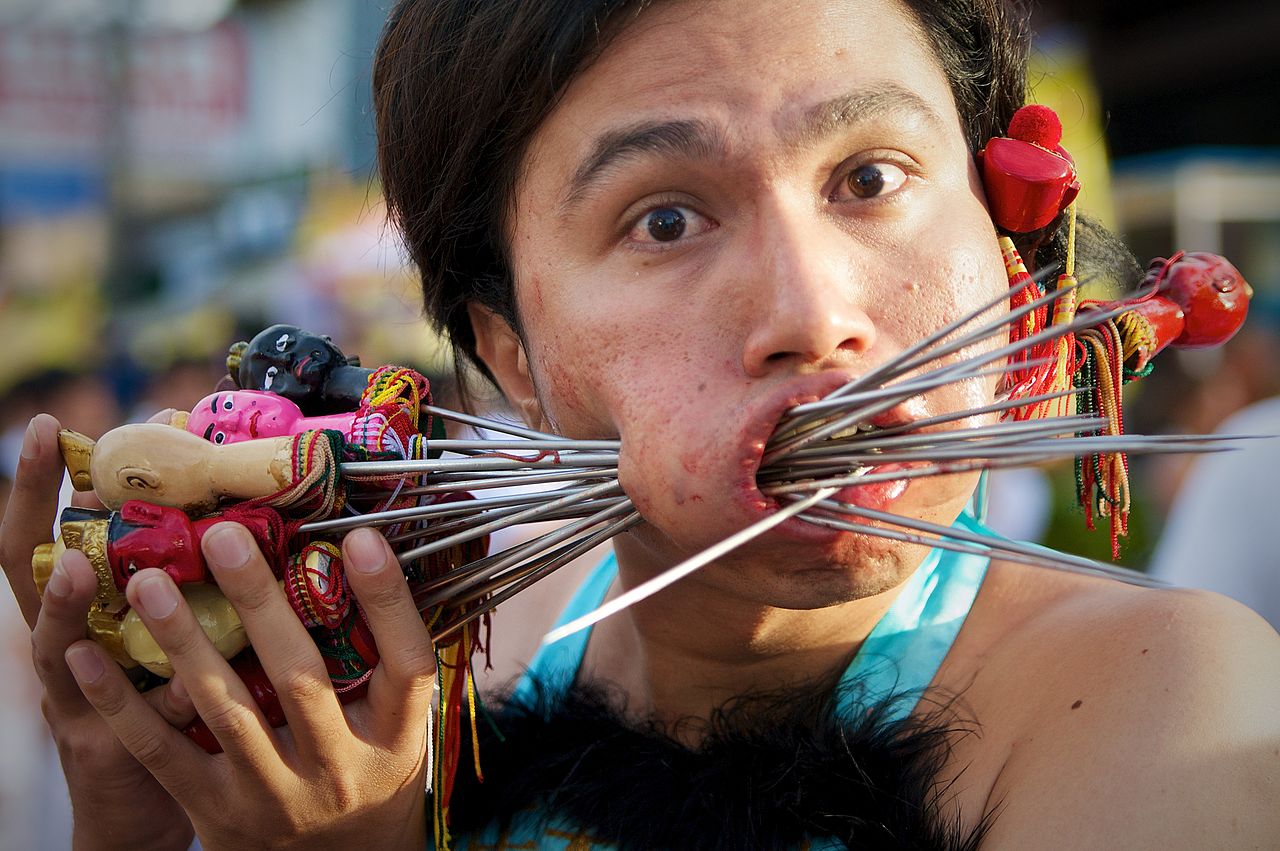 The origins of the festival in Thailand began in Phuket in the early 19th century when a travelling opera company from China were struck sick, and so abstained from meat to observe spiritual practices to appease the gods. The local Thai people were impressed by the results and adopted the tradition, and the event now lives on throughout the Kingdom in the form of this nine day festival.

Phuket’s celebrations have now become quite extreme with the famous Mah Song parade, where celebrants ritually walk on hot coals and pierce their mouths and skin among many other extreme religious practices. In a sense they are showing us what we put animals through for our ritual of eating, ad no visitor to the Phuket vegetarian festival can go away without rethinking their diet.

More moderate Thai people celebrate the vegetarian festival by erecting poles and hang lanterns along with lighting candles to welcome the Nine Emperor Gods of the Chinese Taoist religion into the temple and loud drums beat throughout the week to protect everyone from evil spirits. Thai’s also use the nine days as an opportunity for spiritual and physical cleansing, merit-making, and cultivating a deep sense of inner peace which helps them in their next lives.

Chiang Mai has plenty of exclusively vegetarian and vegan places year round, but for this 9 day period the supermarkets and non vegetarian restaurants also promote the festival (similar to Lent in Catholic countries) by offering vegetarian dishes. Look out for the bold yellow and red sign that looks like the number 17 –  It says ‘Jai’ and means vegetarian. The sign signals street food vendors, cafes and restaurants all over the city that are observing the vegetarian festival and have tasty veggie and vegan delicacies on offer.

While Chiang Mai doesn’t have any sort of special parade like Phuket (thankfully), there are a few cultural events around town. Around Warorot (Kad Luang) market there are lots of celebrations (since it is a Chinese market), and at the few Chinese temples, Thai people will hang lanterns and light candles outside to ward off evil spirits.

If you have any other places to visit please let us know in the comments! Don’t forget to tag @luxury_Chiang_Mai for all your food adventures and photos! We’d love to see where you end up!

Have a great vegetarian week!